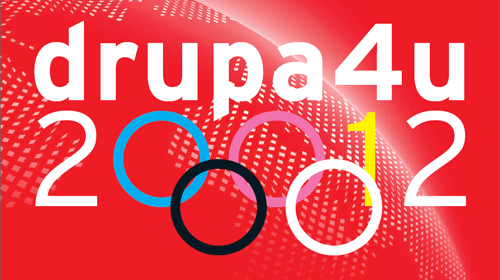 drupa report No. 4 - see you in Düsseldorf:

In the current issue of the drupa report, everything revolves around the highly innovative and powerful growth market of package printing. With growing variety in package types in the industrialised West and foods previously sold loose in emerging markets now being increasingly packaged, the number of printed packages is set to grow overall. Packages have a variety of tasks to perform – in protecting their contents, conveying important information, playing a promotional role at the point of sale and, importantly, communicating the brand.

The drupa report No. 4 – the last issue before drupa 2012 – is itself packaged. To stimulate your curiosity, we’ve wrapped the 72-page magazine in 280 g/m2 cardboard. And you won’t be disappointed by the contents. Be inspired by the current trends in package printing, embark on a journey of discovery through Düsseldorf’s Altbier breweries and find out about the extensive programme of events at drupa 2012.

Another article is devoted to the growth market of corporate publish ing and presents award-winning projects of 2012. By the way, the drupa report No. 3 ranks among the elite of international CP products. Last year, one of the coveted awards of the ICMA (International Corporate Media Award) went to the drupa magazine, with the finishing effects receiving special commendation.

Along with finishing in the form of relief embossing, hot foil lamination and the use of special inks, paper is again being accorded special status in the drupa report No. 4. Eight different papers (among them a beer paper and a black paperboard coated with synthetic fibres) are emphatically demonstrating the potential of the print medium.

A special foretaste of drupa 2012 comes from the Gastro Guide – a separate brochure that presents the entire range of cuisines offered at the exhibition grounds and that you can use as a kind of menu for your time at the fair.

We are of course also continuing the series “Faces of the fair” and “Focus on international markets”. This time, five editors-in-chief from China, Chile, India, Russia and Turkey have addressed the issue of what they think will be the megatrend of drupa 2012. And the article on the ‘friendly helpers in orange’, who are on hand with advice and practical assistance throughout the 14 days of drupa, looks at the service provided at the information points, ticket counters and cloakrooms.