Why we give some words more “linguistic space” 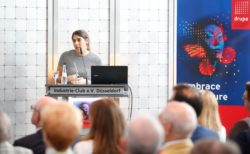 For her thesis “Gemination and Degemination in English Affixation: Investigating the Interplay between Morphology, Phonology and Phonetics” Ms Sonia Ben Hedia (30) was awarded the 2019 drupa Prize on 17 June 2019. In her doctoral thesis written at the Philosophical Faculty of Heinrich Heine University Düsseldorf the linguist uses phonetics to investigate how affixed words are processed and stored in the brain. With her empirical research the prize-winner closes a gap in linguistics thereby creating scope for further fundamental research.

In her thesis, Sonia Ben Hedia deals with so-called affixed words. These are words that feature an “affix”. An affix is a unit of meaning such as un- or in-, that is used to form words like “unnatural” or “intolerant”. Unlike other words, affixes cannot stand alone. A key focus in Sonia Ben Hedia’s thesis is how affixed words are processed and stored in the brain. The 2019 drupa Prize winner was able to draw conclusions here with the help, among other things, of phonetics.

Focus on Double Consonants
Sonia Ben Hedia focused her gaze on those English words that form double consonants in connection with affixes – like un-, as in un-natural, in- as in in-numerable, dis- as in dis-satisfy, and -ly as in real-ly. In the pronunciation of double consonants like “nn”, “ss” and “ll”, two possibilities exist: Either they are pronounced for a longer duration than a single consonant, which is termed “gemination” or doubling of consonants – i.e. the “nn” in unnatural is pronounced longer than the “n” in uncool. Or they are pronounced shorter ("degemination"), which means that the “nn” in unnatural is articulated just as long as the “n” in uncool. In the case of “gemination”, it is assumed that both components of the word are stored individually in the brain and are only assembled during speech production. “Degemination”, on the other hand, means that affixed words are primarily processed and stored in toto, i.e. as a whole in one word.

Empirical evidence of gemination has been lacking until now; assumptions were largely based on intuition. Ms Sonia Ben Hedia was able to close this gap with her thesis. For this purpose, the linguist examined and evaluated thousands of acoustic signals from sentences and conversations, which she had a huge group of English-speaking test subjects pronounce on tape. Ms. Ben Hedia was then not only able to prove that words which are formed with the affix “un-”, i.e. which imply a negation, are given a literally much larger temporal “linguistic space”, i.e. they are pronounced longer.

Quoting from the scientific report in his speech, Rainer Hundsdörfer said that Ms Sonia Ben Hedia had made an important contribution to the understanding of morphophonological interactions. "Even difficult statistical methods are well explained, which makes it easy even for uninitiated readers to understand the complex analytical methods used in the work. To sum up, this is an outstanding thesis that deserves the highest academic accolade,” said Rainer Hundesdörfer.

On the Prize-Winner
Sonia Ben Hedia was born in Kreuztal in the administrative district of Arnsberg on 8 October 1988. After graduating from secondary school in 2008, she trained to be a teacher of English and History at the University of Siegen, Germany, where she also taught at grammar schools and comprehensive colleges. After successfully completing her first state examination, in 2014 she began doctoral studies at the Philosophy Faculty at Heinrich Heine University in Düsseldorf. She completed her thesis "Gemination and Degemination in English Affixation: Investigating the Interplay between Morphology, Phonology and Phonetics" on 6 September 2018 after a successful viva examination, receiving the overall grade of summa cum laude. Sonia Ben Hedia boasts teaching experience at universities in Germany and abroad, where she worked as a guest researcher. She is the writer or lead author of several scientific publications and has given numerous lectures at national and international level. Sonia Ben Hedia is currently a research assistant at the Heinrich Heine University in Düsseldorf.

On the drupa Prize
Ever since 1978, Messe Düsseldorf has awarded the drupa Prize, that comes with Euro 6,000 prize money, for an outstanding thesis written at the Faculty of Philosophy of Heinrich Heine University in Düsseldorf. The prize money is used for the publication and dissemination of the award-winning work in the humanities. The drupa Prize is awarded by a panel of experts comprising the Rectorate and Vice Rectorate of Heinrich Heine University (HHU) Düsseldorf, the Chairman of the drupa Committee and the CEO of Messe Düsseldorf.