Thesis on Frankenstein awarded the drupa Prize -- drupa - May 28 to June 7, 2024 - Messe Düsseldorf
close
back 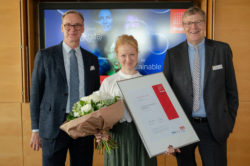 Friederike Danebrock is awarded the drupa Prize 2022 for her thesis “Frankenstein. On Making Fiction”. drupa supports outstanding young scientists from the Faculty of Philosophy at Heinrich Heine University Düsseldorf with this award every year.

Dr. Andreas Pleßke, CEO of Koenig & Bauer AG and Chairman of the drupa committee, congratulated the prize winner on her achievement in a personal video message: “I congratulate Friederike Danebrock cordially on receiving the drupa Prize 2022 and endorse this excellent decision. I am very happy that drupa also extends its activities beyond the print industry by promoting special talents of the Faculty of Philosophy with our Prize.”

Friederike Danebrock starts from the observation that the “Frankenstein complex” – the collection of adaptations and rewritings grouped around Mary Shelley’s novel Frankenstein – is characterised by a remarkable coincidence of theme and practice: we are dealing with a story about reproduction that is itself extraordinarily reproductive. The central character – the monster – and the story in which it appears are subject to the same existential process.

Her award-winning work is convincing because of its very innovative approach to cultural theory developing a theory of aesthetic fiction by incorporating different disciplinary approaches, stated the Faculty of Philosophy at Heinrich Heine University explaining the reasoning for her nomination for the drupa Prize.

On the drupa Prize winner 2022
Friederike Danebrock was born in Cologne in 1985. After a business management training in a publishing house, she studied German Language and Literature and English at the University of Cologne from 2008. In 2015, she successfully completed her Master’s degree in both subjects. From 2015 to 2018, she held a scholarship in a post-graduate college of the German Research Foundation at Heinrich Heine University in Düsseldorf. There she completed her doctorate in the Faculty of Philosophy and finished her thesis “Frankenstein. On Making Fiction” in May 2021 after a successful disputation with the overall grade summa cum laude. Friederike Danebrock works as a research assistant and lecturer at Heinrich Heine University Düsseldorf and lives in Cologne

On the drupa Prize
Ever since 1978, Messe Düsseldorf has awarded the drupa Prize, that comes with Euro 6,000 prize money, for an outstanding thesis written in the Faculty of Philosophy of Heinrich Heine University in Düsseldorf. The prize money is used for the publication and dissemination of the award-winning work in the humanities. The drupa Prize is awarded by a panel of experts comprising the Rectorate and Vice Rectorate of Heinrich Heine University (HHU) Düsseldorf, the Chairman of the drupa Committee and the CEO of Messe Düsseldorf.

The next drupa will be held at the Düsseldorf Exhibition Centre from 28 May to 7 June 2024. Exhibitors can still register online by no later than 31 October 2022 at www.drupa.com.